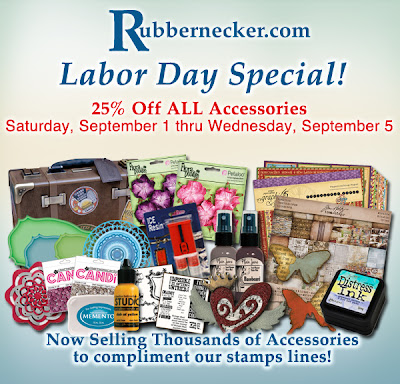 Warning: This is a long post.  I suggest going and getting a cup of coffee before sitting down to read.

This is the final product:

At the stamp show in Novi, MI, I did this demonstration quite a few times.
A few folks asked if there was a tutorial on the Rubbernecker Design Team Blog (Stampin Sisterhood).  Please note that many of the people I met at the stamp show were beginning stampers... so I have tried to show as many steps as possible.

Are you still with me??? GOOD!
I matted and mounted the card on cardstock.  I also added a few dots of Stickles glitter glue--just for fun! 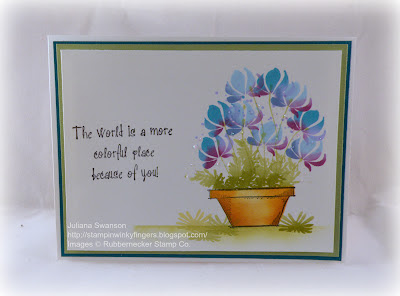 Thanks for sticking with me through this!  I sure hope it was helpful.  IF I missed anything or I was unclear, please leave me a comment so I can address the issue.

Also, there are more cards I made with this technique and this homemade pallet HERE.

Embossing resist is truly one of my favorite techniques.  It is always magic to me.
There is a good tutorial HERE.

I used the Rubbernecker stamp, Journal Circle Flourish.  It was originally designed to be a scrapbooking stamp, but I like it as a frame.  Especially since Rubbernecker has SO many wonderful phrase stamps.

On both cards I used clear embossing powder, but white would work just as well.  I also used the same inks on both.  I use Tim Holtz Distress Ink: Dried Marigold and Spun Sugar.  (I love to use Dried Marigold with pinks since it has such pretty pink undertones.)
I also used some Stickles (glitter glue) to add a touch of sparkle. 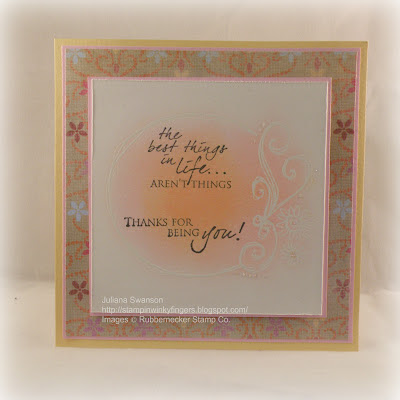 In this first card I used the sentiment stamp: Best Things.  I made a simple cut between the lines "aren't things" and "thanks for".  I can re-assemble them later if need be. 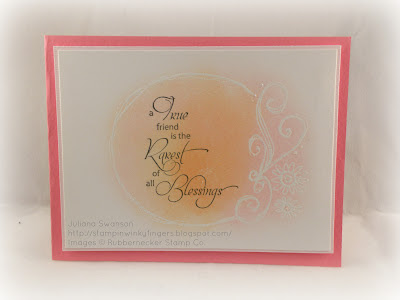 The second card uses the "a true friend" sentiment; it can also be found in the Garden Tree set (one of my favorites).

Thanks for stopping by, today.

VERY soon I will have a tutorial featuring the demo I did at the Novi, MI stamp show in the Rubbernecker Stamp Company booth.

Today is the beginning of another Sisterhood Sunday Challenge!
All of the play along details can be found on the Stampin' Sisterhood blog!

Here is your inspiration:

I have a Clean and Simple card today for you! 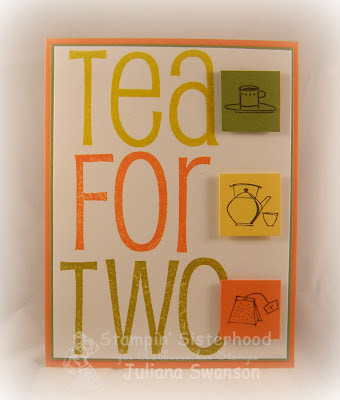 Juliana
I am a full time wife and homeschooling mom with couple of part-time jobs. After my faith, is my family and then crafting!